The KJV Only Cult,
Part II

The KJV Only cult is comprised of highly divisive people who make extreme and ludicrous declarations about the KJV in their efforts to exalt it as being the only word of God. 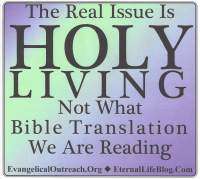 It gets much worse, though. Before I proceed, please know that we readily acknowledge that there definitely are some fine Christians who use the KJV. There is a big difference, however, between them and those in this cult. If you think I'm being too harsh on these KJVO people to say they are in a cult, please ponder this fact—they have exalted the use of the KJV to a salvation issue. Some will openly teach it is, but others do it indirectly and in a way that is not clear to everyone. Nonetheless, they still think the use of the KJV is a salvation issue. What Everyone Should Know About The Word of God
INCREDIBLE! Many Church People Only Have DEMON Faith

Here is how they do it. Oftentimes, the KJVO people will cite the following reference to warn non-KJV Bible users about these other [per]versions (as they call them) that have left out words:

For I testify unto every man that heareth the words of the prophecy of this book, if any man shall add unto these things, God shall add unto him the plagues that are written in this book: And if any man shall take away from the words of the book of this prophecy, God shall take away his part out of the book of life, and out of the holy city, and from the things which are written in this book (Rev. 22:18,19, KJV).

Apparently, the KJVO people think Rev. 22:18,19 had no relevancy for about 1,500 years until 1611 when the KJV was first translated. Also, please know that passage is referring to nothing less than salvation itself. How can we be sure? If one has his part (name) taken out of the book of life, then he will be thrown into the lake of fire (Rev. 20:15). Other translations say the tree of life instead of the book of life, but either way it is still referring to salvation. We know this because the tree of life is in the paradise of God (Rev. 2:7) and if you don’t enter the Holy City (New Jerusalem), or the paradise of God where the tree of life is (Rev. 22:2), then you will be thrown into the lake of fire. There is no third choice. Also, ponder this:

Blessed are those who wash their robes, that they may have the right to the tree of life and may go through the gates into the city. Outside are the dogs, those who practice magic arts, the sexually immoral, the murderers, the idolaters and everyone who loves and practices falsehood (Rev. 22:14,15).

To be outside, as verse 15 says, is to be outside the city of New Jerusalem. The ones who will be there are also cited and described in that same verse. By comparing Rev. 21:8 with Rev. 22:15 their destiny is revealed to be in the lake of fire.

Again, the KJVO people cite Rev. 22:18,19 to counter Christians who use some other translation, but that passage is referring to salvation itself. Hence, the people who apply that Scripture in this manner are saying that using the KJV is a salvation issue, which makes that message both a false gospel and cultic (because it has a wrong plan of salvation).

[By the way, many of these KJV Onlyites also believe in the heresy of eternal security. They apparently have completely missed the meaning and context of Rev. 22:18,19. When John wrote that warning it was written to Christians, as is the rest of Revelation. He gave them a type of warning about losing salvation that would be impossible if eternal security was true. Hence, John's theology could not have included eternal security. It is impossible.]

For more information about the KJV Only issue and Gail Riplinger, please consult the following book.

An Email Regarding KJV Onlyism