How Important Is Your
Thankfulness To God?

God Wants Us To Be Thankful 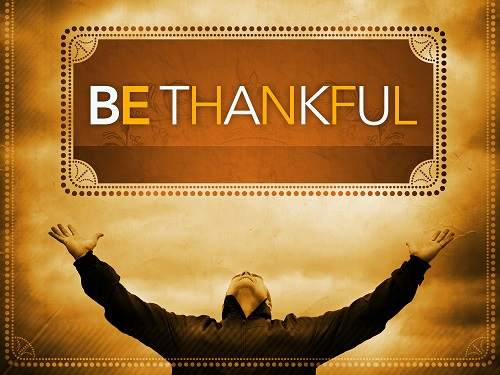 How important is your thankfulness to God? How common was it in the early church? Was Jesus himself thankful when he walked the earth? Are you thankful to God now? You might be surprised to read how common thankfulness was in the early church and its connection with other spiritual things. To show how God definitely wants to be thanked for what he has done for us, ponder the truths in Lk. 17:12-19—where the Lord healed 10 lepers, but only one returned to thank Jesus. The Lord said:

Jesus asked, “Were not all ten cleansed? Where are the other nine? Was no one found to return and give praise to God except this foreigner?” Then he said to him, “Rise and go; your faith has made you well.” (Luke 17:17-19)

The General Command To
All Christians To Be Thankful

It is unmistakable that the early Christians were taught to be thankful, even to the point of being overflowing with thanksgiving to God:

Let the peace of Christ rule in your hearts, since as members of one body you were called to peace. And be thankful. (Col 3:15)

Devote yourselves to prayer, being watchful and thankful. (Col 4:2)

So then, just as you received Christ Jesus as Lord, continue to live in him, rooted and built up in him, strengthened in the faith as you were taught, and overflowing with thankfulness. (Col 2:6,7)

Once when Paul was a prisoner in chains, being transported to another location by ship, a ferocious storm hit them. It appeared for a while that all would die. It was an amazing trial, but Paul still unashamedly gave thanks to God in front of hundreds of ungodly people:

After he said this, he took some bread and gave thanks to God in front of them all. Then he broke it and began to eat. (Acts 27:35)

QUESTION: Do you thank God in a restaurant, home, work place, etc. before you eat? The early Christians would.

People are Unthankful To
God Before They Get
Spiritually Darkened More

The spiritual decline of a person is often step by step. The following passage shows it can begin with not being thankful to God!

For although they knew God, they neither glorified him as God nor gave thanks to him, but their thinking became futile and their foolish hearts were darkened. Although they claimed to be wise, they became fools and exchanged the glory of the immortal God for images made to look like mortal man and birds and animals and reptiles. Therefore God gave them over in the sinful desires of their hearts to sexual impurity for the degrading of their bodies with one another. They exchanged the truth of God for a lie, and worshiped and served created things rather than the Creator—who is forever praised. Amen. Because of this, God gave them over to shameful lusts. Even their women exchanged natural relations for unnatural ones. In the same way the men also abandoned natural relations with women and were inflamed with lust for one another. Men committed indecent acts with other men, and received in themselves the due penalty for their perversion. Furthermore, since they did not think it worthwhile to retain the knowledge of God, he gave them over to a depraved mind, to do what ought not to be done. (Rom 1:21-28)

If all of that isn’t enough to make the point that we need to be thankful to God, ponder the following. It shows the people who are ungrateful to God are part of the reason why society, in general, is so vile:

But mark this: There will be terrible times in the last days. People will be lovers of themselves, lovers of money, boastful, proud, abusive, disobedient to their parents, ungrateful, unholy, without love, unforgiving, slanderous, without self-control, brutal, not lovers of the good, treacherous, rash, conceited, lovers of pleasure rather than lovers of God—having a form of godliness but denying its power. Have nothing to do with them. (2 Tim 3:1-5)

For someone to say, Thank goodness is to take away from what belongs to God! Who or what is goodness that he or she or it should get our thanks instead of God? Amen! Let’s unashamedly thank God as the Bible shows for he is the one worthy. Let your thankfulness to God be overflowing. God bless you.

Devotion To The Lord Jesus Christ

God In The Flesh

Lessons From The Apostle Judas Iscariot

Test Your Scriptural Knowledge of Salvation