Taking the Scissors to
The Full Gospel of Grace

Deception By Omission With The Full Gospel of Grace

The most commonly known passage on the full gospel is:

For what I received I passed on to you as of first importance : that Christ died for our sins according to the Scriptures, that he was buried, that he was raised on the third day according to the Scriptures. (1 Cor 15:1-4) Folks, the full gospel of grace has been minimized and distorted in an effort to support the heresy of eternal security! One example of how it has been minimized is by what the group led by KP Yohannan called Gospel For Asia wrote:

We don't believe that whether or not a person can lose their salvation is a foundational issue of Christianity.

SHOCKING! So, how has the full gospel of grace been distorted? In various ways, including the use of ellipses - as will be shown here!

Without doubt, sometimes it's advantageous to use ellipses (...), which indicate an omitted part from a quoted statement. This is often a legitimate means of written communication. However, through an ellipsis, sometimes information vital and relevant to the context can be cleverly concealed!

I've noticed when the eternal security teachers refer to the gospel from 1 Cor. 15:1-4, they often make a point of avoiding verse 2! They usually do this by starting to read or write at verse 3 and just mentioning, in passing, the subject of Paul's gospel from verse 1. (David Breese does this in his tracts: Heaven And How To Get Thereand The Assurance Of Salvation.) Sometimes, however, the omission of verse 2 is much more obvious, but only to those who know what that verse says or to those who will spend the time to check the reference and read it from the Bible for themselves! One example of this exact kind of deception through omission by an eternal security teacher is the following as done by Dr. Renald Showers. 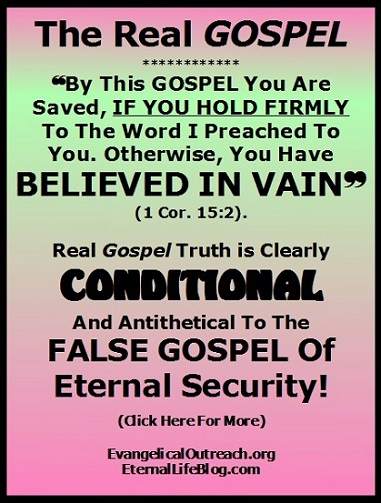 "For example, in Ephesians 2:8-9 the Apostle Paul declared, For by grace are ye saved through faith; and that not of yourselves, it is the gift of God Not of works, lest any man should boast.' Paul also identified the specific Word of God in which people of this present age must believe in order to be saved. That Word is the gospel defined in 1 Corinthians 15:1-4: I declare unto you the gospel

which I preached unto you, which also ye have received and in which ye stand; By which also ye are saved . . . that Christ died for our sins according to the scriptures; And that he was buried, and that he rose again the third day according to the scriptures' " (Israel My Glory, December/January 1994/95; Volume 52, No. 6, by Dr. Renald Showers, p.11).

What is the True Saving Grace

What are the missing words, as indicated by the three dots? They are most of verse 2 and part of verse 3, as quoted in the King James Bible as follows:

"IF ye keep in memory what I preached unto you, UNLESS YE HAVE BELIEVED IN VAIN. For I declared unto you first of all that which I also received, how"

Why do you suppose those clear and powerful words from 1 Cor. 15:2 were omitted? Do they affect the statement being quoted by their omission? Certainly, the omitted words from verse 2 clearly teach the believer's security is CONDITIONAL and not unconditional as Dr. Showers embraces. Showers cut short verse 2 immediately before the conditional word "if" is stated, thereby making the gospel seem unconditional instead of conditional!

Reader, can you see how this completely changes the original statement by the Apostle Paul? If you made the statement: "Interstate 70 will lead you to Denver, Colorado in ten hours, IF you go the speed limit and don't stop" and someone later quoted you, omitting the latter part of that statement which begins with the word "if," it would be a serious distortion! This is similar to what the eternal security teachers often do with the gospel of grace, as described in 1 Cor. 15:2!

By this gospel you are saved, if you hold firmly to the word I preached to you. Otherwise, you have believed in vain (1 Cor. 15:2). 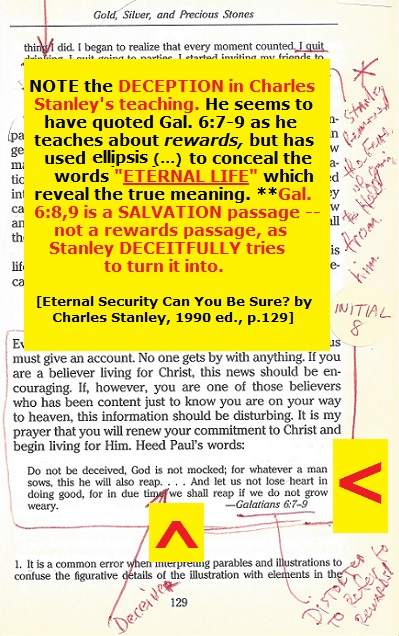 Please note, Paul used all those words in verse 2 to explain his gospel of grace! By these words, Paul clearly stated that in his gospel, the believer's security was CONDITIONAL EVEN BEFORE he mentioned the death, burial and resurrection of Christ in verses 3 and 4! Though the eternal security adherents hate this fact, they can't refute it! See also Rom. 11:19-23 and Col. 1:23, two other Pauline passages, which also show the believer's security is conditional!

Besides the obvious religious deception being conveyed by removing 1 Cor. 15:2 from the gospel presentation, Gal. 6:8 is another prime example of deception by omission from the grace changers! In context, that salvation verse says:

Without question, eternal life is referring to salvation itself and not rewards, as the ferocious wolves in sheep's clothing use Gal. 6:7-9 for. See image to the right from Charles Stanley's book Eternal Security Can You Be Sure. Furthermore, according to Paul's grace teaching, we must sow to please the Spirit to reap the harvest of ETERNAL LIFE. We must not give up, as too many do! Like it or not, that is God's word and part of the real full gospel of grace, which is not going to change.

Charles Stanley quoted the NASB when citing Gal. 6:7-9. Here is that passage and the words he omitted in bold red for your examination:

Charles Stanley's gospel excludes Gal. 6:8 with its conditions, unlike the Apostle Paul's gospel of grace! How great do you think Charles Stanley is now?

Beloved, remember the whole counsel of God is vital regardless how disturbing or unpopular that truth may be! Never forget these facts about the real full gospel of grace with its conditional security. Remember 1 Cor. 15:2 and Gal. 6:8,9 and tell others to watch out for deception by omission and if they are saved now tell them to hold on to what they have. They must not give up sowing to please the Spirit to reap ETERNAL LIFE!

Is Believing on Jesus Christ The Same as Obeying Him?

Skull And Crossbones Awards For False Prophets And False Teachers